"​I am happy to see the company is having a re-birth of enthusiasm and energy under the capable hands of Jennifer Meller and Carlos Venturo. A new generation is building new dreams!"
– Carol Tetén
Pursuing my Passions is Carol Teten's memoir that traces the history of Dance Through Time as well as her own exciting life story. Read more about the book and how to get your own copy here. 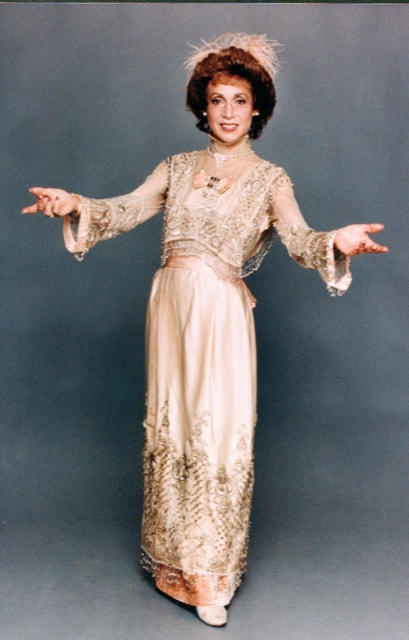 Carol Tetén has been a professional educator, scholar and Publisher in the field of historical dance for over 40 years.  She is the creator of DANCETIME PUBLICATIONS and the DANCE THROUGH TIME performance dance company.

​Carol's career is based on the insight that historical dance can and should be an exciting and fascinating art form, just like historical painting, historical sculpture, and historical music.  However, historical dance has traditionally not been the subject of significant investigation because of the transitory nature of the medium...unlike the easily preserved media of painting, sculpture, and music.  Over the past four decades, Carol has conducted thousands of hours of research and taught herself to read and translate 8 obsolete dance notation systems.  She is one of a few recognized leaders who have developed historical dance into an exciting field with resources comparable in sophistication to the materials available for studying the historical development of other art forms.

​Publisher, DANCETIME PUBLICATIONS
In 1997, Carol Tetén founded DANCETIME PUBLICATIONS to publish her work to the broadest possible audience.  The company has grown from publishing the work of one artist to publicizing the works of international researchers and choreographers. She has also preserved films that have not been previously accessible to the general public. Through her leadership, the publishing company has become the primary leader in bringing Dance History to life for a broad international community, and for preserving the vibrancy of its meaningful heritage.

Founder, DANCE THROUGH TIME
Carol Tetén founded Dance Through Time in 1980.  Based in San Francisco, California, the mission of Dance Through Time was to research, preserve and perform social dances of Western culture from the 15th Century to the present; and to collect and disseminate information about historical social dance.  The Company has offered performance, outreach and educational programs year-round in the San Francisco Bay Area and has toured nationally under the auspices of Columbia Artists Management Inc.  Under her leadership, the Company performed in 36 states, 120 cities, and before more than 150,000 people.  Under Mrs. Tetén's guidance, the Company grew from two apprentice dancers to an ensemble of 12 professional performers.
Mrs. Tetén choreographed and directed six full-length productions for the company:  Dancetime! 500 Years of Courtship Through Dance, A Renaissance Revel, The Baroque Salon, A 19th Century Romance, Dancing the 20th Century, and Origins of Ballet. She built hundreds of shorter productions from this core.

Reconstructor and Choreographer
Carol Tetén has choreographed and reconstructed social dances from the 15th Century through the 20th Century. Her research has taken her to libraries and archives throughout Europe and America, and she has assembled a collection of over 1,000 rare books, manuscripts, journals, film clips and other materials. From these materials, she has reconstructed and choreographed over 100 dances for DANCE THROUGH TIME. Many of these dances were previously inaccessible, but now can be seen by a broad range of audiences. They offer insight not only into the times in which the dances first appeared, but also into the diverse cultural forces that shape contemporary social dance forms.